In October 2018, The Conference Board Consumer Confidence Index® reached its highest level since September 2000, despite a steep stock market slide and potential headwinds from inflation and rising interest rates.1 Another measure, the University of Michigan Index of Consumer Sentiment, has also remained higher in 2018 than in any year since 2000.2

Confidence dropped slightly in November, but remained at elevated levels not seen since the dot.com boom.3 However, all three major stock market indexes fell into negative territory for the year on November 20.4 So it’s uncertain how long consumers will remain unruffled by market volatility. 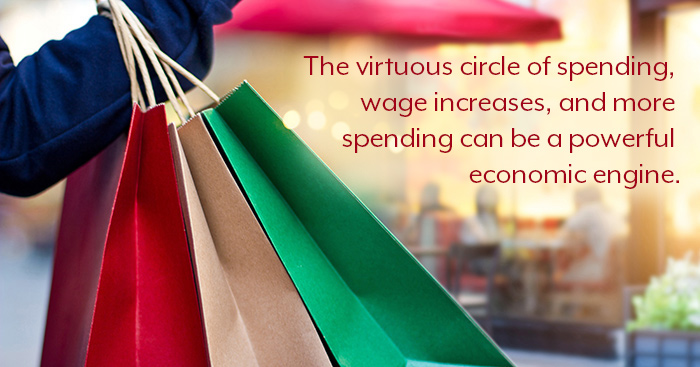 The Consumer Confidence Index is derived from a questionnaire sent each month to more than 3,000 U.S. households. The survey asks consumers to rate current business and employment conditions in their regions and expectations for future conditions (six months hence) for business, employment, and household income. It also asks about plans for major purchases, but these responses are not included in calculating the index.

The University of Michigan Index is derived from three more detailed surveys that go to a smaller set of consumers and ask questions about overall economic conditions, personal finance, and buying intentions.

Some economists consider consumer confidence to be a lagging economic indicator, because consumer attitudes tend to change more slowly than the broader economy. On the other hand, consumer expectations for the future are a leading indicator that may help predict future economic direction.

At the heart of high consumer confidence is a rosy outlook for jobs and wages. The 3.7% unemployment rate in September and October 2018 was the lowest since 1969, and there were a record 7.3 million open jobs in August 2018 — more jobs than unemployed individuals. Wage growth has finally begun to pick up speed, growing at an annual rate of 3.1% in October, the highest rate since 2009. Inflation edged higher to 2.5%, but even so, workers are beginning to see real wage increases.5

Consumers may not be studying these statistics, but they express confidence in line with the numbers. In the November Conference Board survey, 46.6% of consumers said jobs were “plentiful,” while only 12.2% thought they were “hard to get.” Looking forward, 21.5% expected increased income in the next six months, while less than 8% expected a decrease.6

Consumer spending accounts for about two-thirds of U.S. gross domestic product (GDP), so if consumer confidence leads to higher spending, it bodes well for the broader economy.7

GDP grew by 3.5% in the third quarter of 2018, a drop from the 4.2% rate in the second quarter but still solid compared with previous quarters. Personal consumption expenditures (consumer spending) increased by 3.6%, slightly faster than the broader economy.8

The November confidence survey suggested that robust spending may continue. More consumers planned to buy a major appliance in the next six months, and the percentage who planned to buy a new home held steady, despite a slowing housing market and the prospect of higher interest rates.9

High consumer confidence is encouraging for the holiday season, the most important time of year for the struggling retail industry. The National Retail Federation projects that retail sales will increase between 4.3% and 4.8% this season (November and December), compared with an average of 3.9% over the last five years. The two-month holiday season accounts for about 20% of all retail sales and as much as 30% for some sectors.10

When consumer confidence leads to higher spending, it typically propels corporate revenues, which may prompt businesses to invest in expansion, hire more employees, and/or raise wages. Businesses have been slow to invest and raise wages, but the recent numbers for unemployment, job openings, and wage increases suggest that the economy may have reached a tipping point. If so, the virtuous circle of spending, wage increases, and more spending can be a powerful economic engine.

The danger in this cycle is that it can also drive inflation, which is one reason why the Federal Reserve has been steadily raising interest rates. Rising rates may help control inflation, but higher interest can cut into confidence and spending as it becomes more expensive to borrow. The University of Michigan surveys found that consumers expected both interest rates and inflation to increase, but still remained upbeat.11

An extended stock market downturn could erode consumer confidence, but jobs and wages may be more important than investments to the average consumer. (And recent losses might be more palatable after the large gains from the long bull market.)

It remains to be seen whether consumer confidence will be strong enough to push through these headwinds. To some extent, that may depend on whether wage increases continue to outpace inflation. For now, confident consumers are one of the greatest strengths of the U.S. economy.

All investments are subject to market fluctuation, risk, and loss of principal. When sold, investments may be worth more or less than their original cost.